Online from anywhere in the world

Nobel Laureate Barry Barish, in the LIGO project, which made the first historic detection of gravitational waves from the collision of two black holes. “Top 20 Discoveries of the Decade” – National Geographic & which earned Kip Thorne, Rai Weiss & Barry Barish the Nobel Peace Prize in Physics. This documentary is made in collaboration with Caltech, M.I.T. & the LIGO Laboratory, funded by the National Science Foundation, MathWorks & Caltech. 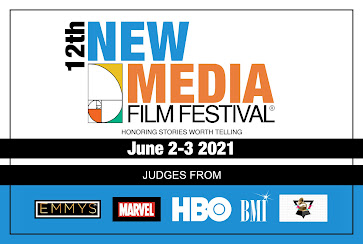 John Strasberg (son of The Actors Studio creators) directed the Los Angeles Premiere Adam’s Apples which is A New Vision of a Classic Work.   John Strasberg – actor, director, author, teacher – has created an unconventional reimagining of one of Chekhov’s greatest romantic comedies, “The Cherry Orchard.”

Al Jazeera Reporter Mahmoud Al Ken in Corona Bats a US premiere in the New Media category from Qatar.   How bats act as a virus reservoir because of their unique immune system, shows how the pangolin may have acted as the intermediate host before transmitting the virus to humans. It also stresses out on the fact that bats are important for the ecological system and that exterminating bats is not a solution for the virus problem.

The moderator of Opening Night Programming Q & A (Event 2) is

Since its founding in 2009, New Media Film Festival® has celebrated cutting-edge media content by providing content creators a platform to express innovative storytelling. Through the encouragement of a global community, artists around the world are able to inspire others through stories that transcend cultural boundaries.

“Watch movies shot entirely on drones, attend panels where industry experts’ riff on the future of web series and network with entrepreneurs who understand how new media is rapidly changing the film industry today.” -VG

For additional information about new streaming releases and where to watch them, please contact Content Coordinator Crystal Zen at  crystal@newmediafilmfestival.com or 310-288-1100.

7/15/2020 “Breaking Free from the Inner Critic’” by Kalie Marino
In her book, “Breaking Free from the Inner Critic”, Kalie Marino makes a convincing argument that we are programmed from birth to believe other’s opinions of us.
9/16/2020 Flash Uganda Media, the youth inspired online media platform offers updated Uganda news
Flash Uganda Media, the popular online news platform offering Uganda news and information at one’s fingertips.
1/20/2021 Mark. J. A - an emerging rapper on the global
Mark. J. A is an emerging rapper from the US currently making his mark on the global music scene.
1/4/2021 Market Raiders FX on transitioning from the 9-5 rat race and becoming a 7-figure day trader
Market Raiders FX offers the means to get the necessary knowledge to trade Forex and ascend to a better life with 7-figure earnings.
2/12/2021 20 Year Old Atlantic City Entrepreneur Presents Tri State Talent Showcase
The event includes music artists of various genres from the tri state area.
Home Products and Services Articles and publications About Us Contact Us Customer Reviews Site search
×